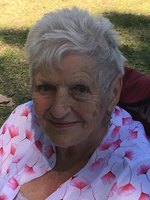 Renate Brigitte Lindner, age 78, passed away peacefully on June 18, 2020 with family by her side. She was born in Vesser, Germany to Franz and Elisabeth Weiss and was a younger sister to Gretel (predeceased). In 1957 Renate married her beloved husband Emil Lindner (predeceased) and emigrated with him as a 16-year old newlywed on an ocean liner to Canada where they worked very hard to successfully build a rewarding life. They were married for 54 years until Emil's passing. Renate always said her greatest gift was becoming a mother to her two daughters Sylvia Fox (Ron) and Monica Lindner (Stewart Collison). Renate felt incredibly blessed to be the adored Oma to Corey Fox (Marika) and Brodie Fox (Carly) and Great-Oma to Emilia, Tabitha and soon-to-arrive Penelope. Oma also enjoyed snuggle time with her furry grand-dog, Bigsby. Over the years, Renate was always busy devoting most of her time to her children and then later her grandchildren, cleaning house (unbelievably her most favourite pastime), gardening, working outside the home, helping others, volunteering at Orillia SMH, and then there was that 10 year stint when she jogged 10 kilometers almost every day. Oma, as everyone lovingly called her, had a passion for animals and was happiest being surrounded by nature, hiking in the woods, canoeing and camping. Mom was a strong, determined, resilient woman who will be missed by everyone who knew her including many relatives in Germany, her niece Lydia Bissig (Hans) in British Columbia and her most precious friend of 63 years, Marianne Disterheft (Nova Scotia). We will miss her every day but rejoice in knowing that she is once again at peace with dad. As per Renate's wishes, private family farewells and cremation have taken place. A Celebration of Renate's life will be held at a later date. If desired, in lieu of flowers, Renate would be honoured to have memorial donations made to Grant's Woods (The Couchiching Conservancy). Donations can be made through Simcoe Funeral Home, 38 James Street, Orillia, ON L3V 1L1, (705-327-0221). Messages of condolence are welcomed at www.simcoefuneralhome.ca