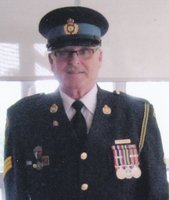 Walton Donald Norman Passed away peacefully with his family by his side on Tuesday, April 27th, 2021 in his 83rd year after a valiant battle with a terminal illness. Don, son of James Edgar Walton (predeceased) and Hazel Gertrude Walton (predeceased), and dear brother to Edgar Miller Walton (predeceased) and dearly beloved husband of Ingeborg Walton (nee Teetenburg) for 59 years. Loving father of Diane Walton, Michelle McQueenie (Craig), and Don (DJ) Walton. Cherished grandfather of Christopher (Jordan), Cameron (Kelly), Liam, Sydney, Ronan, and Alexandra. Great grandfather to Charlee, Wesley, and one on the way. Dear brother-in-law to Edith (George), Marianne (Henk). As well as Hannelore (Gerhard) & Irmgard (Hans) all predeceased. Uncle to many nieces and nephews from Canada and Holland. Honourary daughter, Karen Watson. Don's life was full of adventure and successful career highlights. He was enlisted in the Canadian Army where he spent 2 years in Germany, became a Corporal and Drill Instructor, and met his young bride on a 'blind date' after being set up on a weekend pass. Don returned to Canada with his wife and young daughter Diane in 1965 and following his time in the army, he became an officer with the OPP in 1967. Over his 25 years as an officer conducting his usual duties, he also was involved with general investigations, training, and drill instruction. He loved to be a teacher and as a result, he was asked to go to the Brampton Police College to become the lead instructor. From classroom instruction, pursuit driving, gun education, crime scene investigations, etc., Don was instrumental in promoting young men and women to the ranks of police officers for six years. During his time in Brampton, Don was asked to go to Moosonee, Ontario, on the shores of James Bay, to set up a program for police foundations at Northern College while with the OPP. This would prove to be the stepping stone to yet another career for Don. He returned to Brampton for a further 2 years and then retired from the OPP in the rank of Sargeant. After some downtime, he received a call from one of the College Inspector's asking him to teach his police foundations course in Kirkland Lake at Northern College. Don would be at the College, with his wife Inge by his side, in the role of Professor for eleven years. Finally deciding it was time to take some "chill" time for himself and his family, Don retired to the Rama Road with his wife, and they took some great trips to Holland, Cayman Islands, a European River cruise, Cuba, parts of Canada, and Scotland (to name a few). Don had a rich and rewarding life surrounded by a loving family and incredible friendships. The family would like to thank all the wonderful medical support from Dr. Sam Babak, Oncologist at Markham-Stouffville Hospital, Dr, Lidia Cheung, Palliative Oncologist with Central LHIN in York Region, Armin, Dad's in house palliative care nurse, Gudlaug Einarsdottir, Palliative Nurse and Shlomit Tobias, Central Care Coordinator with Central LHIN, countless PSW's, OT's and all the support from the doctors at Orillia Soldiers Memorial Hospital and Royal Victoria Hospital in Barrie. Cremation has taken place. He will be lovingly remembered by his family and his many friends. Due to Covid restrictions, no service will be held. As an expression of sympathy, memorial donations may be made to the Royal Canadian Legion or OPP Veterans Association through the Simcoe Funeral Home, 38 James St. E., Orillia (705) 327-0221. Messages of condolence are welcomed www.simcoefuneralhome.ca