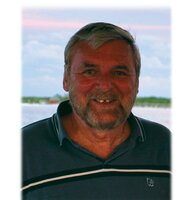 Kevin Patrick Burke After a brief but courageous battle with small cell lung cancer, Kevin passed away peacefully at the Royal Victoria Regional Health Centre in Barrie, ON on Monday, July 25, 2022. His wife, Suzanne, was by his side. Kevin was born in St. John’s, NL but made ON his home in 1994. He leaves to mourn his wife, Suzanne Tipple, who is grateful for their years together and will always remember the many trips they had on their Harley. Also mourning Kevin’s loss with broken hearts are his son Brad, daughter-in-law Tanya and their children Ashton and Haylee. Kevin also leaves behind family, extended family and friends from coast to coast in Canada and the USA. Kevin was an extraordinary guy who had a magnetic personality. During his working life, he was a Mechanic in many facets of the vehicle industry. He had a very solid reputation as one of the best diesel engine mechanics. In 2005, Kevin was introduced to volunteering with the Canadian Red Cross. He quickly developed a passion for that organization and its principles. He became very involved in Logistics and put his name forward for numerous deployments, not only in ON but across Canada. As the years passed, he was well known by many folks at all levels and was highly respected by members of various departments across the country. In 2012, his reputation preceded him when he was invited to assist the American Red Cross in New York/New Jersey in the aftermath of Hurricane Sandy. He was so proud to have been given this opportunity. In the summer of 2017, after retiring from his career as a Mechanic, Kevin volunteered to be part of the Logistics Team for the BC wildfires. He thoroughly enjoyed helping the people and livestock that were impacted by that devastating event. His reputation in BC was solidified during the first few weeks and he was offered a full time contract until December 2018. He was overjoyed and again, very proud! Thank you to all the staff of the Specialized Seniors Care Unit and the ICU at the RVH. Your care of Kevin and compassion for both Kevin and Suzanne did not go unnoticed and will never be forgotten. In lieu of flowers, a donation in Kevin’s memory to either Furry Friends in Barrie or the RVH in Barrie would be greatly appreciated. At Kevin’s request, cremation has taken place. A Celebration of Life will be held on Saturday, August 6, 2022 at Simcoe Funeral Home, 38 James St E, Orillia, ON from 1:00 pm to 3:00 pm. There will not be a service or inurnment. To truly honour and reflect Kevin’s personality, the Celebration will be an informal gathering. Everyone is encouraged to be comfortable and come as you are……..shorts, T-shirts, motorcycle leathers or whatever you choose to wear. Messages of condolence are welcomed www.simcoefuneralhome.ca